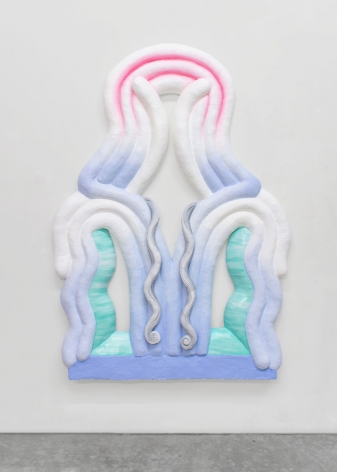 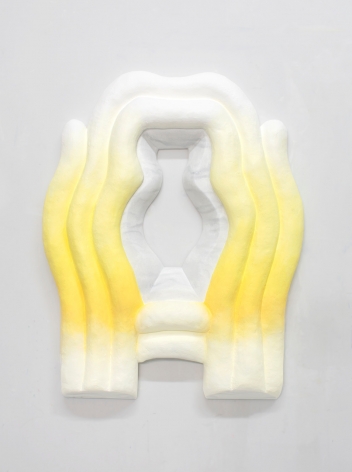 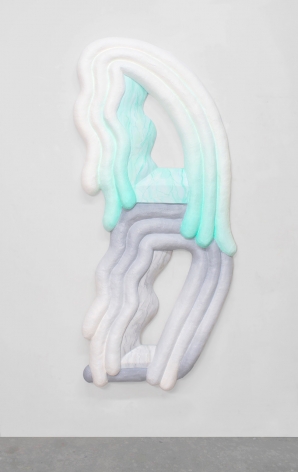 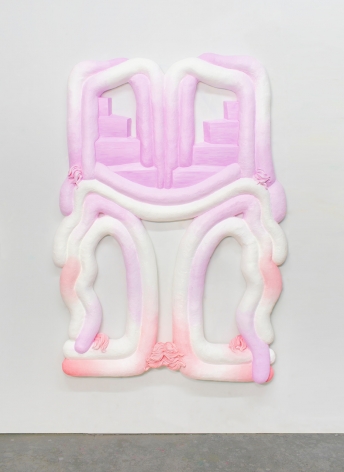 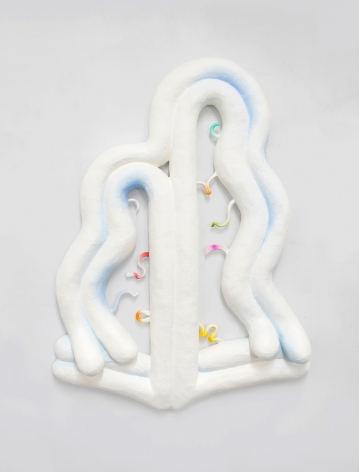 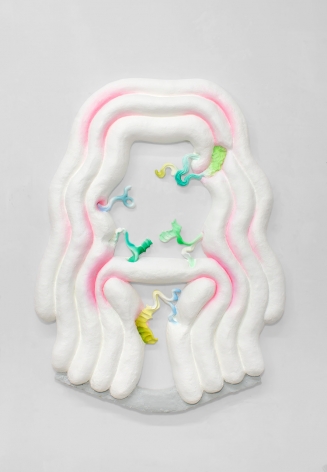 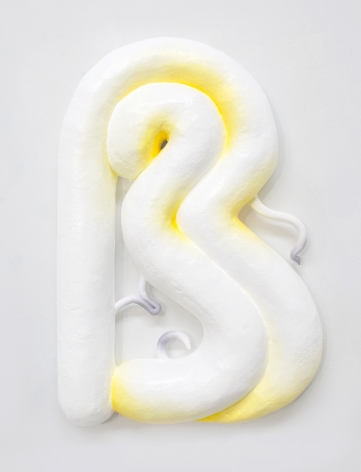 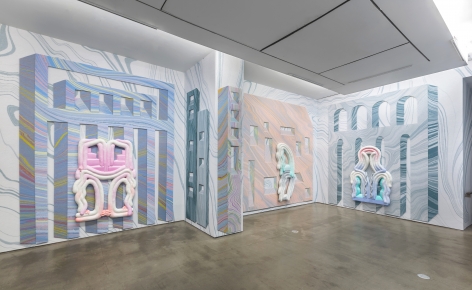 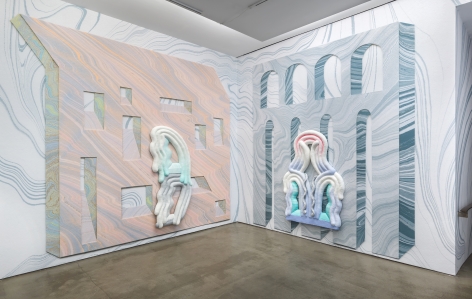 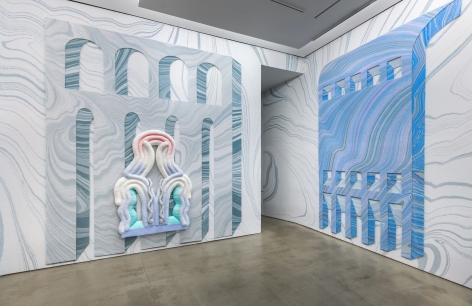 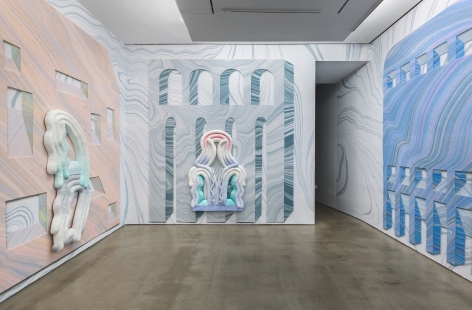 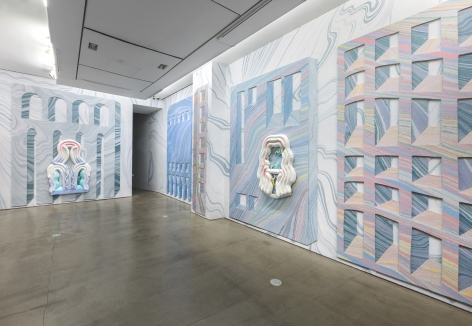 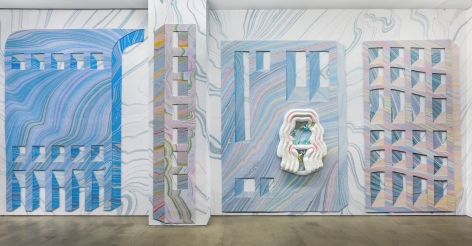 Asya Geisberg Gallery is pleased to present Lauren Clay, “Windows and Walls”, a solo exhibition of sculpture, mounted on a wallpaper installation that covers the gallery walls. Previously featured in “Monochromatic” at AGG, Clay’s work has become increasingly complex, and in “Windows and Walls” the marbleized wallpaper and biomorphic sculpture intertwine visually and conceptually. Originating as white, tubular, and textured twists on the angular rigidity and slickness of Minimalism, Clay’s sculptures adopt pronounced references to space, architecture, and the body, and add high color and detailed curlicues. In tandem, her wallpaper acquires a double layer of illusionistic yet improbable spaces floating on a background of seemingly never-ending undulating stripes of color. The artist’s process translates a small collage of hand-marbled paper into an immersive floor-to-ceiling environment. Using traditional marbling techniques that evoke antique books, Clay’s psychedelic patterns leap from elegant old-world decoration to contemporary, digitally scanned, and aggressively scaled work.

In this exhibition, a riddle of Escher-like patterns with quixotic spaces forms a backdrop for equally playful sculptures, which similarly vibrate between flat and illusionistic space. The viewer is asked to re-situate oneself continually – the sculptures fold and curve in rhythmic parallels, but also interrupt the gaze with cracks of bright color, and suggest openings or windows that force a point of view. In Clay’s universe, instead of a window into real space the negative spaces act as a frame for the wallpaper, frustrating the need for “here” and “there”. The sculptures hint at the physicality suggested by the wallpaper, whose architectural arches, columns, and possible edifices are nonetheless patently unreal. The ever more oneiric spaces - influenced by the architecture of Claude Costy, Le Corbusier, Aldo Rossi, or the drawings of Nathalie du Pasquier – turn the gallery into pathways through time, space, and scale.

The sculptures suggest orifices, dangling limbs, or undulating anemones, with colored details that could be petals, tongues, or wrought iron accents. Gravity of curvy flesh is felt, but so paradoxically is the rigidity of carved steps or medieval arrow-slit windows. Clay makes sure that we keenly sense the authority of the artist’s hand, whether in the roughly-grooved sculptures or the painterly poetics of pigment floating through water. The very idea of marbling – suggesting a stone’s striations via drops of paint on barely-there paper – shows the interplay inherent in Clay’s entire project – combining painting, sculpture, architecture, and design to re-envision their potential for spatial contrast, fantasy, and confusion. 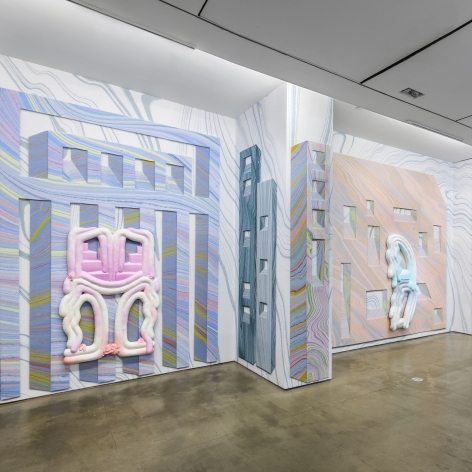 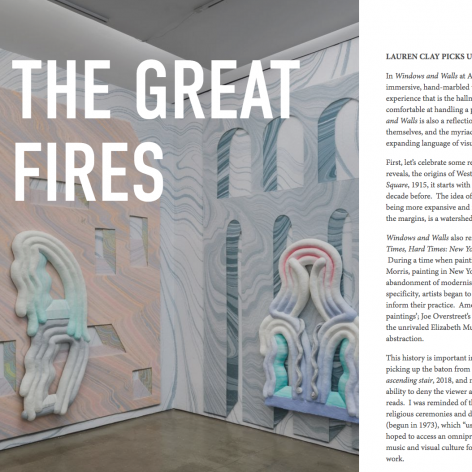 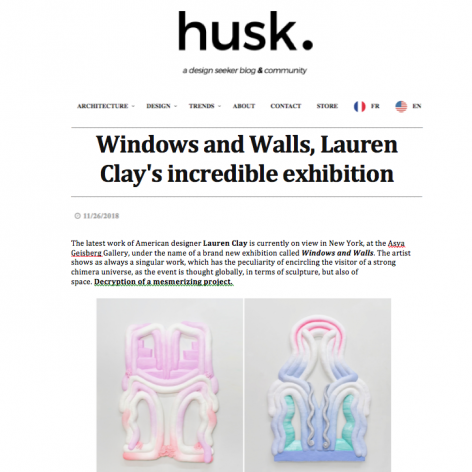 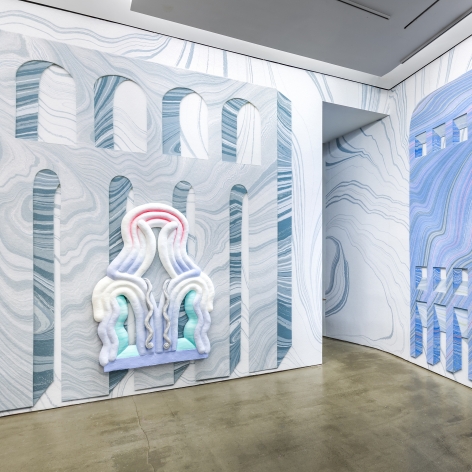