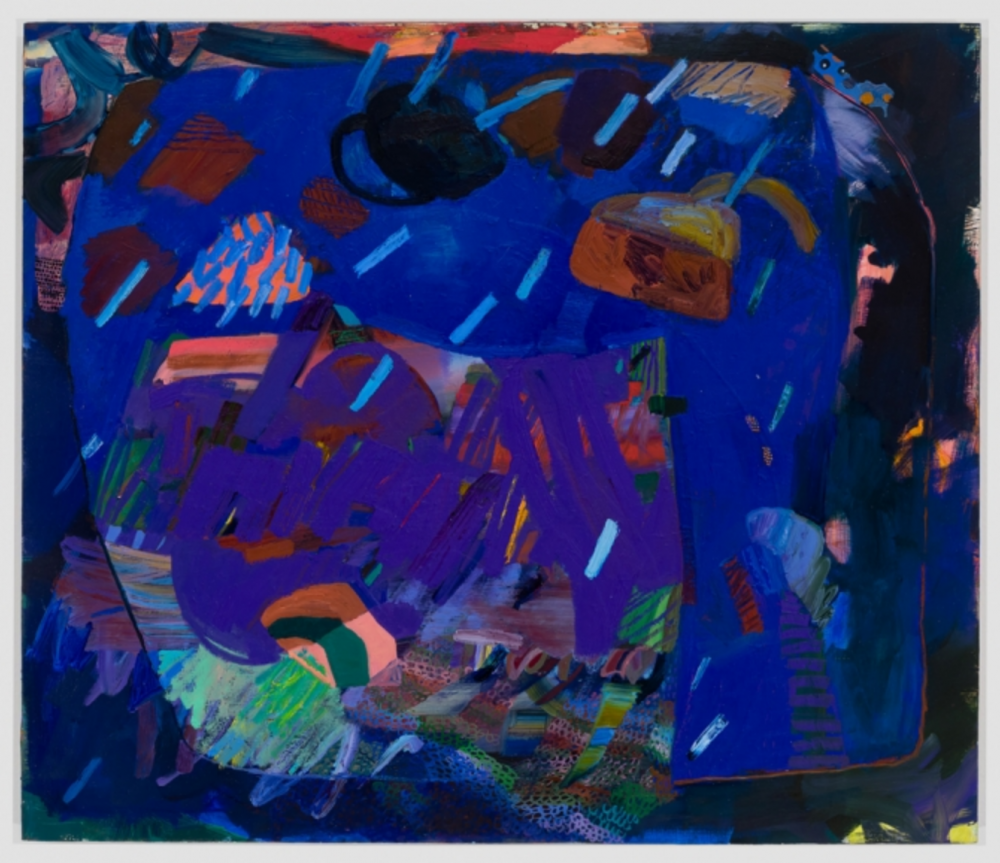 Contributed by Andrew Woolbright / Carolyn Case has mounted a colorful swarm of pastels and paintings in her third solo show with Asya Geisberg Gallery, “Before It Sinks In.” The title is a wry double entendre on the word “sink,” as Case uses the concept of a kitchen sink to develop an abstract language. Her pictorial spaces function like sinks of time, catching the moments of a family dinner, from the preparation of the meal to the video games played while the dishes are washed. This narrative extension places the work in a rich lineage of artists imagining the macro within the micro: Bonnard and his bathtub, Morandi and his still lifes, any number of painters and fire. It also seems connected to the Troxler Fade, the gaze that can turn the routine into an arcadia. Most broadly, Case’s sink may be an enhancement of Leo Steinberg’s flatbed picture-plane: William Blake doing the dishes.

Yet one doesn’t sense longing within this work. Instead, Case employs a vivid and playful palette that blends the haptics of the video game Fortnite, which Case’s children often play after dinner, with a version of Hans Hoffman’s “push and pull” into and from the surface of the canvas to create pictorial space. Here Case’s work holds reminders of early 20th century paintings – in particular, Matisse’s Goldfish (1911) and some of Charles Burchfield’s open-center compositions. But she avoids obvious subjects or referents, instead emphasizing the luxurious optical play of double-loaded brushes over deep space (think of Tal R focused on illusion) and what it suggests existentially.

It is a nice surprise to see surfaces built up on top of one another, and to spy textures that didn’t make the cut unsanded and visible, powering through the picture plane. The approach is refreshingly unfussy. Case constructs tilting, wobbly shapes that, in the case of Build Battle (a direct reference to Fortnite), ascend like stacked karst. It is the conflation of shared experiences, of the sounds and colors coming from the living room entering into the kitchen and finally arriving in the sink, that make these works enigmatic and non-hierarchical. Whatever the external circumstances, the dishes always need to be done and put away as the conversations and intimacy of shared moments hang in the air above the sink. Case’s extraordinarily immersive paintings capture this expansive aspect of ordinary life.

About the author: Andrew Paul Woolbright (Chicago, b. 1986) is an artist, gallerist, and writer working in Brooklyn, NY. A graduate of the MFA Program at the Rhode Island School of Design in painting, Woolbright has exhibited with the Ada Gallery, Nancy Margolis, and Coherent in Brussels, BE. He is the founder and director of Super Dutchess Gallery located at 53 Orchard Street on the Lower East Side in New York City and currently teaches at SUNY New Paltz.