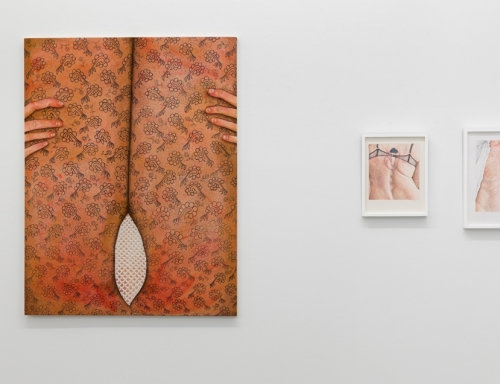 An altar is a sacred place, and an artist who makes altars implicitly demands reverence. Yet she is also sharing her values and obsessions—what she, too, regards with respect, wisely or not. If she can do so with a bit of irony or trickery, all the better. So it is with "Altar-ed Bodies" by Clarity Haynes. Her paintings take both their realism and fantastic elements seriously. They are frank to the point of humility, but also intimidating. Does art have to make you squirm if it is to assert a gendered identity. Can it, now that feminist art routinely incorporates such creature comforts as fabric patterns and decoration? Maybe only if the artist must squirm a little, too, like Katarina Riesing.

The very thought of a razor burn makes me uncomfortable, and so does "Razor Burn" by Katarina Riesing. Artists like Haynes have used their own raw flesh and fetishes to make viewers squirm, especially straight male viewers. Many more have used textiles and decorative patterns to reclaim “women’s work” for women, as a matter of pride.  Riesing does both, in close-ups of a woman's body barely covered if at all. You can feel the burn. She differs from most, though, in that she is squirming that much more.

Works on silk confront the viewer with a single upper body, much as with Haynes—its head cut off and out of the picture. Flesh may remain visible through sheer fabric, right down to ghastly spots that could well be razor burns, if not something more infectious or an allergic reaction to art. Thicker fabric appears to cover the picture plane in other works, as if stifling the body, while stripes discolor one figure that much further. One can hardly overlook that, traditionally, an obsession with appearance, whether in clothing or in "purifying" the flesh of unwanted hair with a razor, reflects the warring demands of female self-assertion and the male gaze. In one image, hands to each side draw apart the fabric. One can hardly overlook, too, their firmness and self-control.

They also just happen to leave a pronounced gap in the patterning, in a shape that recurs often for Riesing—the oval of a vagina. Then, too, the silken translucency is real, if only one can decide what to call the ground and what an illusion. She also incorporates gold threads, embroidered by hand. Works on paper have a still greater precision, in colored pencil and ink. There bare limbs cluster to the point of anonymity, as in a meat locker or a collective dance. They resemble dolls in a Surrealist photograph by Hans Bellmer.

Still, the decorative realism is pleasant enough, even reassuring, for anyone but her. Those hands may hold firm, but Riesing does not seem at all proud of that upper body. It squirms quite enough by itself. The silk lends its patterns to flesh, as if rubbing in the burns. In another image, traces of gray could belong to the wood grain of a panel, but again silk serves as ground, with dye in place of paint. Puns like these turn the discomfort around, as if it arose from painting itself.

In another drawing, blackness has the last word, twice. The black of bra straps does not look in the least seductive, no more than the bony, irregular body beneath. (Bumps of what I take, hesitantly, to be a spinal column have the overall shape of another vagina.) Nestled beneath the bra, as if constrained by its pull, the outline of another woman shows her back, too—while drawing up her legs and burrowing into her chest, for whatever comfort she can take. It could almost be a tattoo, willfully inflicted as an assertion of identity or a token of love, but it never quite fits into the larger body with her delicate shading. It leaves one admiring Riesing's honesty and skill, while feeling the pleasure and the pain.

Katherine Hubbard, too, has to look out for herself. She finds another space between painting and photography, as "Avoid Glancing Blows." Her photograms have a painterly touch, but their dark blur is also a form of disguise. Images include legs underwater, not so very far from Riesing's body parts. Others depict run-down interiors and murky landscapes, like a lament for fly-over country, while tall prints of hanging tapestries recreate them on paper while leaving them in ruins. The dappled light, like Riesing's pencil and silk, more than makes up for the damage—and the threat.

Clarity Haynes ran at Denny Dimin through January 25, 2020, with an assist from Invisible-Exports, Katarina Riesing at Asya Geisberg through February 15, and Katherine Hubbard. at Company through February 23.