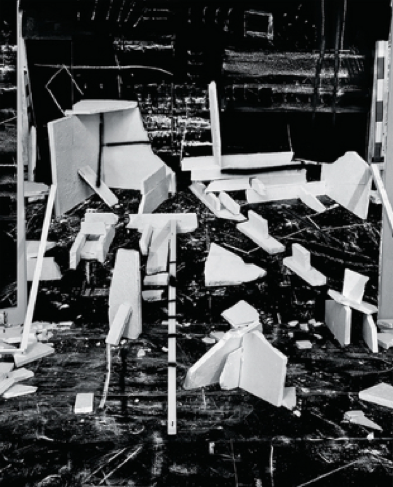 The photographic works in Rodrigo Valenzuela’s “Hedonic Reversal” (all works 2014) depict ruins, or representations of ruins, which have been constructed from stark white elements—lath, chalk, a crumbling material that might be drywall or polystyrene—and set against a saturated black background. They have the air of abandoned infrastructure projects, neglected social housing, or generic buildings that become visible only as they decay. The destruction seems to be ongoing. They are broken, disintegrating into white dust, worn away altogether, leaving only lines of chalk.

Valenzuela assembles these structures in his studio, photographs them over time, and then destroys them, so that the photographs remain the only evidence that they ever existed, thus generating the kind of temporal tension often in play when artists photograph sculpture. But Valenzuela’s images sit uneasily in this tradition: They are far from straightforward. In one of the five prints in this presentation—the first New York solo show for the Chilean-born, Seattle-based artist—you might notice, for instance, a stripe of spray paint tagging two boards; yet rather than bending around the actual volumes of these objects, the stripe hovers slightly above them. In another image, what seem at first glance to be floating planks are in fact lengths of tape that also appear to skim the surface of the picture.

These visual hiccups arise from Valenzeula’s layered process. After photographing his sculptures in situ, he modifies the resulting images and then shoots them again, perhaps laying out several individual original photos like tiles to create a larger gestalt or staging yet another ruin in front of them. A tile or crack in the floor material, then, may actually be a place where two photographs meet; two boards that dovetail at a corner might exist in separate pictures. We can’t always be sure of what we’re seeing. The works, as dizzying as Escher prints with their myriad vanishing points and lines of perspectives, accordion spatially and temporally. Some of the laths seem to careen into the image from where we as viewers stand, as if the act of looking has made us complicit in the destruction of what we’re looking at.

The work reminds us that the medium of photography—among many other modes of representation— can be used to create entirely simulacral realities: flat, labyrinthine spaces that have no “real world” referent, that barely exist. For Valenzuela, this is not mere academic speculation, but an urgent political truth. The troubled, unstable spaces he conjures might prompt us to remember how different spaces do and do not accommodate human beings. Valenzuela often brings issues of labor into his work, and Maria TV, a seventeen-minute, fifteen-second video shown alongside the “Hedonic Reversal” prints, underscores this subtext. Latina women first narrate their experiences as immigrant workers and then don maid costumes, reenacting the kinds of soap opera roles typically allotted to them. We get the sense of a place that is not particularly welcoming—a shallow, uneasy space of nonbeing for those who have little choice in the matter.