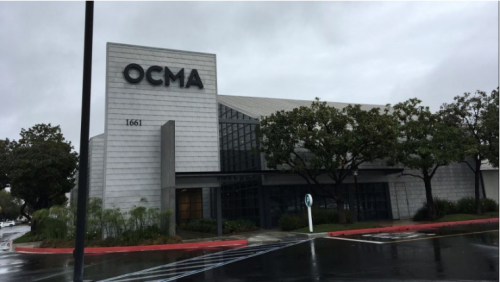 Last May, the Orange County Museum of Art made a big splash with the unveiling of models and plans for its long-awaited new location at Segerstrom Center for the Arts in Costa Mesa.

OCMAExpand — Santa Ana, as it’s dubbed, is housed in a former Room & Board furniture store. The site opened in early October and is planned to continue as OCMA’s temporary home through early 2021.

It’s a bit tucked in from Sunflower Avenue — the navigation app Waze might direct you to a different location altogether. But intriguing things are happening in the museum, including exhibitions of six solo artists living and working throughout the Pacific Rim, and an edgy exhibit of photographs from OCMA’s permanent collection.

“We love it over here,” said Todd D. Smith, CEO and director of OCMA since 2014. “We’re having so much fun programming the new space. We’re inviting a new audience, being part of a vibrant community in Santa Ana and Costa Mesa, and it offers us a fresh sense of identity and purpose.”

OCMAExpand is two stories, with ample air space, clerestories, exposed roof beams and tons of natural light coming in from elevated windows. The new space has actually inspired the museum and its staff to reconsider what it can present.

“It’s a little bit of an experimental space here,” Smith said. “It allows for artists who work not only with objects, but with performance-space work. The space here allows for that in the gallery setting, and we’re eager to see how our audiences react.”

Valenzuela has also co-curated “Forsaken Utopias: Photographs from the OCMA Permanent Collection,” along with Cassandra Coblentz, senior curator and director of public engagement at OCMA.

“As we’re moving physically, it seems an ideal moment to push ourselves to think about what a museum’s role is and what it can do,” Coblentz said. “The idea of the programmatic focus on California and the Pacific Rim allows us to treat the space as a laboratory to explore that region. We want dynamic, active engagement with our visitors.”

That means an increase in performances and public programs, outreach beyond the museum’s walls and elements to exhibits that can change and evolve over time.

For instance, Soto-Díaz has been demonstrating Judo moves almost every operating day upstairs in her exhibition space, which includes black floor mats and spiral sculptures made of colored Judo belts.

Nakagawa, a 2.5-generation Japanese American (his grandfather was born in Hawaii, his parents immigrated to the U.S. as teens), is displaying his interactive work in three galleries upstairs. “Peace Resonance: Hiroshima/Wendover as a Room” features two metallic sound beds that visitors can lie on and a video of the artist at work. The sound beds combine the interior acoustics of the Hiroshima Atomic Dome in contemporary Japan and the Wendover Airfield hangar in Utah where the B-29 bomber Enola Gay left in 1945 to drop an atomic bomb on Hiroshima.

“My family is originally from Hiroshima,” said Nakagawa, 54, who lives in L.A.’s bustling and evolving Koreatown. “The atomic bomb, the end of World War II have always sort of loomed in our culture, and as an artist, I knew I would like to do a piece about it.”

Nakagawa’s piece “Rescue” consists of a video projection of drawn images of the Ku Klux Klan; watercolor paintings of the KKK and other racially charged images; a hair-drying chair rescued from a beauty salon; a white sheet and a station where one can hear audio recordings of Nakagawa consulting with a therapist about his anxieties and KKK-related dreams.

he artist has also been organizing field trips to Orange County’s Little Saigon. He has led visits to the Institute of Vietnamese Studies and the Museum of the Armed Forces of the Republic of Vietnam, both in Westminster, and has conducted plein air painting sessions at the Asian Garden Mall and the Nguoi Viet Daily News, also in Westminster.

“I always wanted to know more about Little Saigon,” Nakagawa said. “I went to UC Irvine in the 1980s and passed by the Little Saigon signs on the freeway.”

For field trip No. 5, he led a group to the Tet Festival at the Orange County Fairgrounds on Feb. 9.

“We were visiting these places and getting this incredible insight,” he said. “While these communities have been insular in the past, in my experience, they’ve been generous and welcoming. We walked in kind of hoping everything would go well, and things have gone beyond our expectations.”

As part of Nakagawa’s exhibition, OCMA has been displaying photographs, written testimonies and audio recordings of the Little Saigon field trips. The next and final one is scheduled for 10 a.m. March 2, with a plein air painting session at Chua Dieu Ngu Buddhist Temple in Westminster.

“For decades, I’ve been going to OCMA as a fan,” Nakagawa said. “It’s my first solo museum show. It’s cool to be given an opportunity.”

OCMA is scheduled to break ground later this year and move into its new location in 2021. The 52,000-square-foot building is being designed by Pritzker Prize-winning architect Thom Mayne and his Culver City-based firm, Morphosis.

Richard Chang is a contributor to Times Community News.

Image: OCMAExpand — Santa Ana, housed in a former furniture store, will be the Orange County Museum of Art’s temporary home through early 2021. (Photo by Richard Chang)