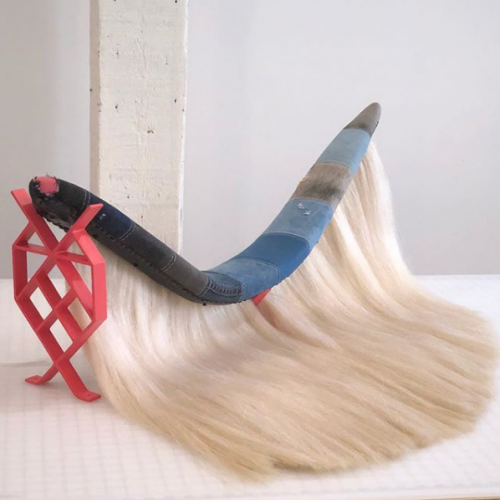 Our title (commonly known as the longest word in Greek at 171 letters) availed itself while I was leafing through a book of unusual, obscure and preposterous words by Josefa Heifetz Byrne. It is likey the most famous word in Greek literature, from Aristophanes ASSEMBLYWOMEN, describing a “goulash composed of all the leftovers from the meals of the leftovers from the meals of the last two weeks. Or, hash,” as Byrne defines it, while Jeffrey Henderson translated the word as a stew of "limpets and saltfish and sharksteak and dogfish and mullets and oddfish with savory pickle sauce and thrushes with blackbirds and various pigeons and roosters and pan-roasted wagtails and larks and nice chunks of hare marinated in mulled wine and all of it drizzled with honey and silphium and vinegar, oil and spices galore.” It could just as well be the stand-in definition of today’s America (minus the bullets and hatred) or a generous description of the average contemporary group exhibition.

Now nobody I know is deeply versed in Greek drama from the 4th century BC. and I have no patience for politics of any stripe, but upon further review the hilarity of this word itself led to an equally cursory investigation of the plot of the play which struck such a resonant chord I proposed this briefest summary to this group of spirited and diverse artists from Pennsylvania to St. Louis, Riverwest to Brownsville for their reactions. They all wanted to be a part of the recipe.

Set in an Athens milieu of “moral and material anxiety” and critical of the current governing body, Aristophanes’ play proposes a parliament of women by way of a pointedly sexual and scatological humor. Ripe for reinterpretation via the visual imagination, the human vibrancy of both source and definition beg for the human figure, just as audiences facing hard times find solace therein. The optimism of a notion such as women in the exclusive position of ruling, Utopia for many, hell for just less than half of our own country, nevertheless acts here as a moment of levity in a sorry time.

My impulse was toward the figurative and its narrative, with specific aspects of the play, the word and the politics in both. My choices reflected these artist’s ability to adapt to a concept in short order, to wit, I knew they would embrace a conceptual backdrop as loose as one very long word, a funky aberration in the long gone world of ancient literature and that each would find a couch for that word that utterly and dejectedly reflects today’s increasingly perilous atmosphere. It’s a tall order: to change everything you need everybody.

And so Rebecca Morgan’s blissful and oblivious, bug eyed and buck-toothed head ceramics stand in as our hoi polloi; dumbstruck and delightful: like it or not, they are us. Esteban Ocampo Giraldo’s painting of a congress comprised of 24 confident and contented women in a board room, implies their voices have been heard, and their collective crush signals a bright urgency for the whole. Trish Tillman provides the throne for our chairwoman in her signature mixture of fine upholstery as fetish on the verge of functionality. Rachel Owens’ haunting, cast concrete stalagmites summon the charred, phallic ghosts of patriarchal administrations past. Joseph Klapper, a Waukesha native, gives us a glimpse inside the actual, plebeian reality: amid the bounty and celebration of a family repast, horrific scenes of self mutilation unfold: this is how we got here. Milwaukeean Sandra Cipollone’s practice of enlivening vernacular postcard and snapshot photography, adding color and commentary with garish and vibrant results, here finds the perfect congregation of distaff Americana, a light hearted gathering of women dressed as the founding fathers, no longer a folly in our newfound farce. Brandon DeSha, also currently a citizen of Milwaukee, literally tears history in half, interrupting and interfering with the dictates of the past and reconfiguring the suspect evidence of photography with incisive and violent care. His regal mash ups mock our sloppy, stentorian sideshow. Andy Cross created our headquarters and poster child. His giant Las Vegas bloom of Technicolor falsehood, an architectural bauble, as ostentatious as it is optimistic, signals humankind’s unabated hubris. His piercing young female anarchist is replete with aggressive bandana mask and requisite hoodie. Surrounded by flames, she might be our only hope.