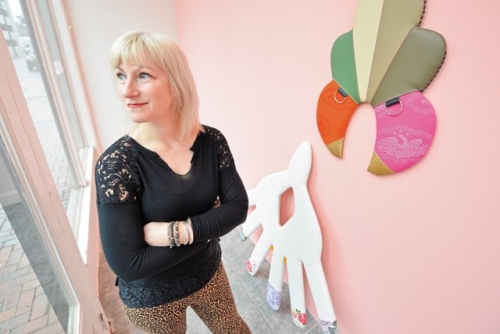 Exhibit: "Remains (to Be Seen)"

Where: Visual Arts Center of Richmond

Coming to Richmond  feels a little bit like coming home for artist Trish Tillman. A Virginia native whose permanent address is currently New York, she’s been living and working in Richmond since January as a resident of the Quirk+VisArts Artist Residency. A show exhibiting the fruits of her labors begins March 30 at the True F. Luck Gallery at the Visual Arts Center of Richmond.

Tillman’s work — free-standing and wall-mounted sculptures incorporating upholstery and found objects — references and subverts concepts that are important to her. This exhibition explores ideas of home and nostalgia, and how memorabilia influences and interacts with the present.

Her art is heavily influenced by family, specifically her paternal grandparents. Tillman grew up experiencing the pride her grandfather felt about his service in the famed 29th Infantry Division, the group that stormed Normandy Beach on D-Day in World War II. After he passed away five years ago, as she looked through his personal effects, she began to examine how such treasures — wartime medals, emblems and other Americana — acted as coping mechanisms, ways to create ritual in chaos.

In her current work, Tillman mixes wartime memorabilia with concepts of “good style” and “a well-kept house.” What does this mean to her? “Constant cooking in the kitchen, a well-stocked bar, and constant jokes and laughter,” she says.

“Kitchens were always really important to me growing up.” —Trish Tillman

Tillman says that one of her primary goals during the residency is to take full advantage of access to VisArts’ impressive roster of offerings and instructors, to see “what can be possible” through as-yet-unexplored media. VisArts Executive Director Stefanie Fedor says, “This residency is unique from others because we are able to offer artists the opportunity to not just make new work, but to learn new skills that may expand their artmaking practice.”

Take screen printing, for example — something Tillman had never tried. At VisArts, she screen-printed an eagle motif from a towel belonging to her grandmother onto a vibrant swath of fabric to incorporate into her sculpture. She’s also learned new upholstery techniques from instructor Haleh Pedram and woodworking methods with David Bohnhoff. Glasswork is another new experience, and Tillman is excited to see how it interacts with her pieces.

In addition to new techniques, she’s switching up her textiles. “It’s different for me to use more tactile pieces,” Tillman says. “In works prior, I was using mostly vinyl and leather, and now I’m trying to expand to see what it feels like to use more traditional home linens.” You’ll see pieces of her grandmother’s floral towels and sheets that recall a sweet bygone era, as well as more formal swatches: metallic-threaded tweeds in jewel colors, and neutral damasks that remind the artist of her grandmother’s lace-draped furniture. Then there’s toile, a perennial classic that makes Tillman think of Virginia.

Tillman traditionally works metallic pieces into her sculpture. In this exhibition, you’ll discover kitchen parts such as drawer pulls, knobs and the like. “Kitchens were always really important to me growing up,” says Tillman, whose father was a restaurant sales supplier. She credits time spent as a child in kitchen showrooms with her father as an entry point for shiny metal into her work.

The American eagle is a motif you can expect to see throughout the exhibition. Tillman asked friends and family for photos of their eagle tattoos, which she’s tracing, screen-printing and incorporating into her sculpture to represent modern expressions of American spirit and pride. “I can make work that deals with nostalgia all day long,” Tillman says, “but really I want to bring it into the contemporary realm.”