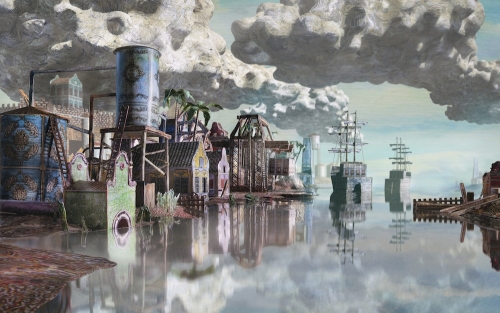 The Dutch artist Jasper de Beijer deftly utilizes game modeling software, precise drawings, and scrupulously detailed models. He has a theatrical flair, a wild imagination, and a passion for the historical research needed to construct outlandish tableaux, which he photographs with a digital camera, making small editions. While photography was once thought to capture the truth of a moment, de Beijer uses the camera elaborate the artificial. There are myriad reasons for this, all of which are folded into his work.

In 2005, during a residency in Japan, de Beijer became interested in the connections between the fantastical worlds of contemporary manga and 19th-century woodblock artists, such as Hokusai and Kuniyoshi. The result was a series of photographs collectively titled Heroes and Ghosts — de Beijer’s title was probably inspired by the exhibition catalogue Heroes & Ghosts: Japanese Prints by Kuniyoshi (1797–1861), published in 1997 to celebrate the bicentennial of Kuniyoshi’s birth.

De Beijer’s other subjects have included photographs of World War I battlefields and soldiers with disfiguring facial wounds and the building of the Crystal Palace in London in 1851. In his current exhibition, Jasper de Beijer: The Admiral’s Headache, at Asya Geisberg (April 10–May 15, 2021), the artist focused his attention on Curaçao, the former Dutch colony, where had a residency in 2017.

Close to Venezuela, the island of Curaçao was wrested from Spain by the Dutch in 1634. In 1662, the Dutch West India Company established Curaçao as the center of its Atlantic slave trade. In 1795, a slave revolt nearly toppled the Dutch rule and took more than a month to defeat. And in 1914, when oil was discovered in Venezuela, Curaçao became the site of oil refineries and a thriving shipping port. De Beijer engages with the island’s history through the historical figure of Albert Kikkert (1761–1819). According to the gallery press release:

“The title The Admiral’s Headache refers to the story of Albert Kikkert, the former admiral and Governor of Curaçao in the early 1800s. Kikkert complained that the white facades of the buildings shining in the sun exacerbated his migraines, and ordered that they all be painted the bright shades typical of Curaçao’s waterfront today.”

According to local legend, another reason that Kikkert might have wanted the buildings around the waterfront painted in pastel colors was because he was part owner of a paint factory. It would seem that the idea of beauty played no role in the change.

The exhibition consists of six large digital C-Prints of varying sizes, determined by the subject matter. “Bastion” (2020) is a nighttime panoramic view of walled plantation houses on hills and identical slave huts in the flat land below. It measures around 33 by 70 inches, while the square, 43 by 43-inch format of “Galjoen” (2018) calls attention to the ungainly shape of a 19th-century armed galleon.

In contrast to model makers, who are often fanatical about verisimilitude, de Beijer has no interest in achieving exact resemblance, and for good reason. Given that his subject matter often bears on the different ways the past haunts the present, the artist is trying to get at its ghostly, disturbing presence, not to pay homage to the glories of the past or become nostalgic about it.

By constructing a highly detailed world based on historical events, de Beijer gives himself permission to ponder the past through his constructions, connecting and juxtaposing unlikely things and events. In “Refinery” (C-Print, 41.75 by 67 inches, 2020), he collapses together aspects of Curaçao’s past and present. Two galleons, their sails rolled up, are anchored in the distance. Further on, we see oil storage tanks on a separate piece of land.

The water, lined with pastel buildings, water towers, and a gantry crane, extends diagonally in from the photograph’s lower left edge. As de Beijer shows us, the bulky, house-like 19th-century galleon was the forerunner of the modern container ship. He underscores this point by matching the insignia on the containers suspended from the gantry elevator with the ones stacked on the galleon’s deck.

Meanwhile, the clouds floating overhead are made of paper he has manipulated to suggest volume. The clouds’ surfaces are covered with different patterns of parallel lines, which describe their topography. Parallel lines are also visible on the buildings’ pastel facades and sides.

The parallel lines evoke etching and the Golden Age of Dutch printmaking, spanning the 16th and 17th centuries, when artists such as Hendrick Goltzius and Rembrandt van Rijn flourished. By linking etching and digital photography, de Beijer reminds us that each medium was popular in its day; and both have been efficient ways to disseminate physical images in society and, in some cases, to deliver the news.

De Beijer associates galleons and oil refineries to call attention to one of the foundations of Holland’s present and past commerce and culture — its use of shipping to transport goods and slaves from one part of the world to another. The questions the artist raises, but makes no attempt to answer, include: What do you do with this legacy? Is it possible to reinvent one’s country to such an extent that it finally leaves behind the past? In America, the struggle between those who want to go back to the “good old days” and those who want to shed the past and go forward has become violent at times.

In “Brigadier” (C-Print, 39.37 by 52.76 inches, 2019), de Beijer has photographed a headless figure lying on a bed that appears to be outside. The shutters on the window behind him are geometrically divided into four triangles, echoing the emblem on the containers in “Refinery.” The brigadier’s uniform and skin have been brought into clarity by the highly detailed, printed surface that de Beijer has applied to his carefully built-up volumetric form.

The fact that we see his calves, a hand, and a forearm, but that he is headless, is strange and unsettling, especially as the artist has placed a hat above the empty collar, supported by what looks like a crooked stick rising up from the back of the empty uniform. In fact, there are no faces in the photographs, only empty uniforms. “Brigadier” is downright weird, oddly funny, somewhat creepy, and unnerving.

Why can’t we see the Brigadier’s face? Is he a surrogate for one part of Dutch history, at once visible and gone? What is the present’s relationship to the past? Aren’t different nations at a crucial juncture as they try to shape and reshape their bonds with the past? These are issues that de Beijer makes visible without becoming didactic. That he moves so nimbly from one subject to another — from a refinery to a brigadier lying in bed to a night sky lit up by glowing paths culminating in explosions that reveal the land plantations and slave huts below — is what convinced me that he is a major artist whose challenging work should be better known in America.

His art is one of engagement and exploration rather than judgment and conclusion. By pulling us into his scenes, he finds a way to implicate us and perhaps even push us into contemplating the material necessities of our lives.