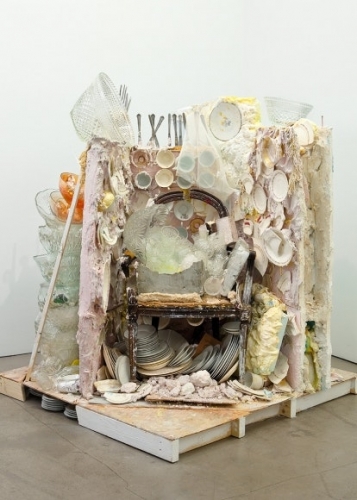 "I first saw the work of JULIE SCHENKELBERG in 2010, in her very first solo exhibition. It was titled “Bad Blood” and consisted of a series of found object installations that I found compelling. I could imagine the artist visiting, as she stated, decrepit buildings located in the once thriving sections of Vinegar Hill and Navy Yard of Brooklyn, and on uninhabited and desolate North Brother Island where the East River is sandwiched between the South Bronx and Rikers Island. These marginal areas are left over from previous eras and for whatever reason have been left to collapse and rot. They present opportunities for anyone curious enough, like a collector or an artist, to mine the past in its detritus and trash. Schenkelberg has made good use of it. I can imagine her visiting these places, and taking back to her studio stacks of window frames, desks, broken plates, and more. The way that she combines these objects in a work such a “Cowered” (2010) creates a tension that delivers an archeological impression in reverse. The art of ruin is a mining of secrets. The appearance of ruin can be deceiving, for it reveals only the fact that something existed for a time, was destroyed or gradually decayed, and then fell into a state of disrepair. Objects that have lost their utility, or had it shorn from them, cannot retain the full strength they had in use. Age old habitations or structures used for some other communal purpose besides domesticity, such as work or worship, may eventually decay especially when left to the elements, though certain sections, more durably constructed, may remain standing."