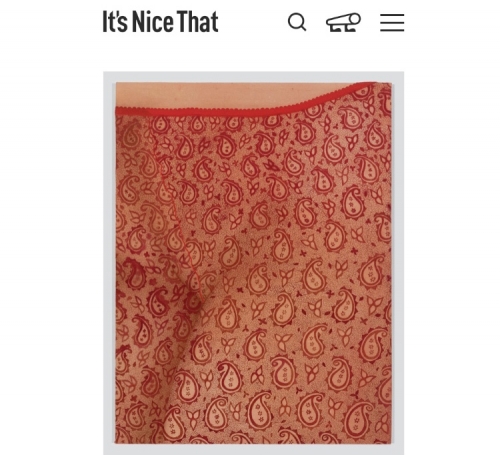 Katarina Riesing on her embroidered bums and figure hugging garments

The New York-based artist talks us through her cropped and textured creations, all of which are a “meditation on one’s own body”.

Beaded bums, stripy all-in-ones and meshy tops; everything that Katarina Riesing creates has some level of familiarity to it. But more often than not she'll leave you slightly bemused.

Having grown up surrounded by art – thanks to two artistic parents, both of which are now retired painting professors from the University of Tennessee – it was commonplace for Katarina to be making things. Art was completely accessible to her, and it even went so far as her parents hiring their painting students as babysitters for her and her brother, “so it was always fun to have a rotating and very strange cast of artists coming in and out of our lives,” she tells It’s Nice That. “I am very grateful for all the art projects we did growing up, such as papier mache animals, weird Barbie outfits, very extra Halloween costumes, friendship bracelets and filing hundreds of sketchbooks.”

This early introduction to the arts has fuelled a longstanding devotion for Katarina, now delving predominantly in the mediums of dye embroidery and silk. Working disparately, her inspirations can arise in myriad forms, but her main muse has always been the traditional medical illustration. “I have always been attracted to the stunningly rendered images of the gruesome interiors and afflictions of the human body,” she says, citing her books on skin diseases and 17th century French surgery texts as those that she returns for reference. Besides this, Katarina also has a likeliness for fashion and gets more than excited about the finer details in clothing and underwear – in this case lace, zippers, textures and sheer fabrics. And now, having heard more about her inspirations, these cropped and zoomed artworks we’re seeing here today all start to make better sense.

While working on these bizarre yet utterly transfixing pieces, Katarina spends the bulk of it in her studio, delving into the silk painting, batik waxing and steaming processes. Everything else is done at home, during which she draws at her kitchen table and informally takes things to her comfy chair in front of the TV for the embroidery side of things. “In my studio, I am exclusively working on raw and crepe de chine silks using traditional silk painting and batik wax resist techniques,” she notes. “This process is usually pretty fast and messy. Dyes tend to get everywhere and the dyes themselves dry pretty quickly and in unpredictable ways, so time is really of the essence when I’m painting. After the dyes have dried, the silks must be steamed to set the pigments and remove any batik wax.”

After which she begins the embroidery, a process known for being long and fiddly. Yet despite taking lengths to create, it’s ultimately her favourite part. “Where the silk painting process is very fast and spontaneous, the embroidery can sometimes take months and is very calculated,” she adds, affirming how doing in front of the TV keeps her mind occupied while she embarks on the repetitive and monotonous stitching. “I log many, many hours watching murder mysteries, cooking shows, documentaries and movies. You name it, I’ve probably watched it.” Then finally, once this part of the journey is finished, she’ll take her work back to the studio to be stretched. This part, she says, is incredibly anxiety-inducing for the fact that silk is so delicate. “Any wrong move with the staple gun could end in disaster. This is immediately followed by a big glass of wine.”

Katarina has most recently launched a body of work as part of a group show at Dinner Gallery, titled Magic Touch. Featuring additional pieces from artists Natalia Arbelaez, Jen Dwyer, Donté K. Hayes, Roxanne Jackson, Faith Ringgold, Aminah Robinson and Anthony Sonnenberg, the show is currently on view until 1 May this year. What Katarina has contributed is characteristically her own, as seen in her piece titled OK – created using hand dyed raw silk with puff paint and embroidery. “The original idea came from one of my skin disease books of a watercolour illustration of a woman’s scarred back,” she says. “I am so obsessed with how weird this image is: a beautifully rendered painting of a woman with this cryptic text scratched into her back.” Proceeding to zoom in on the image and play with the text, the choice of “OK” on her back is quite the statement with “multiple reads, of affirmation but also ambivalence.” She adds: “In adding the embroidered unhooked bra, I wanted this to also be a gesture with different narratives attached: a woman unhooking her bra after a long day or the start of a sexual act. Something both banal and naughty.”

Other pieces include the “most time consuming” one called Yellow Stripes, inspired from a Man Ray photograph of Lee Miller’s torso and sweater designed by Mara Hoffman. Another, Squeeze, is crated using a batik resist process on a silk crepe de chine. All of which denote a pure affirmation of a detailed craft, and one that purposefully tries to confuse the viewer. “I want them to be visually compelling and confusing. I hope that the materials themselves are intriguing in their texture, their surface and the colour combinations I choose. I like them to teeter on abstraction,” Katarina concludes. “I do hope that in looking at them there is a meditation on one’s own body – in humorous, visceral, awkward and dirty ways.”