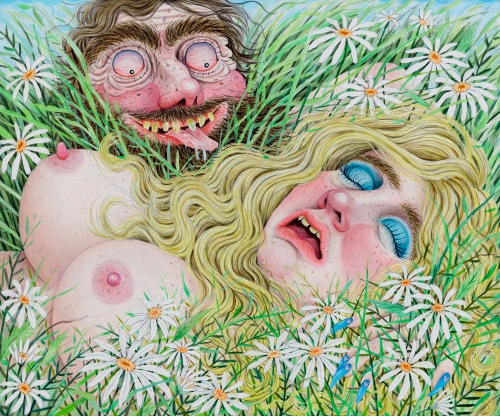 Pimples, cinnamon rolls, and a mountain man making paintings in the nude are some of the kinds of imagery found at Rebecca Morgan’s exhibition of recent paintings, ceramics, and works on paper at Asya Geisberg Gallery. The exhibition is titled “In The Pines,” and that is the exact feeling you get when viewing Morgan’s work since all the pieces seem to come out of an off the grid culture. Purposely made to be humorous and grotesque, Morgan presents hyper-detailed representations of stereotypical Appalachian Americans.

The ceramics included here expand on her earlier work in the medium, which she previously exhibited at the gallery in 2014. Her raku sculpture Pajama Jug (2015), with its elaborate and intricate caricature of a head, and its gonzo look, echoes the two-dimensional media. All of the dozen ceramic jugs are figurative with similar anthropomorphic appearance, splayed teeth, and bulging eyes but are individuated too. Each one’s uniqueness leads one to wonder what their backstory is and how they came to be. Moreover, their reference to alcohol and its effects makes a veiled reference to promiscuity and licentious behavior found throughout the exhibition’s images.

Drawing on influences such as R. Crumb, Francisco Goya, and MAD Magazine, with an ice-cold splash of Dutch style — e.g. Pieter Brueghel, Hans Memling, and the Van Eycks — Morgan shakes the bottle and pours out a delicious mixture of exaggerated bumpkin-looking characters. This is evident in Family Reunion (2016), which depicts a trio of all-American country folk indulging in a buffet of cake, soda, corn, and Cheezies Puffs snacks, some of which are served on a matriarch’s saggy, bra-less breasts — yummy!

All of the manically detailed complexity and bright color of Morgan’s work may make viewers envy the pair of awesome shades worn by a stoned young man in After Work Sunset (2016). Although the characters are made comically freakish, Morgan’s cartoonish renderings are imbued with a proud sense of charming guilelessness and self-acceptance. In a 2015 interview with Priscilla Frank for The Huffington Post Morgan says, “These characters are blissfully unaware, unruly, wild, and untamed. They are off the grid and free and not affected by anyone or anything’s influence and I’m very attracted to that concept.”

Morgan uses her crazy bunch as models to show what life could be when guilty of sin. Wandering Smoker (2016), a beautiful drawing, shows a close-up portrait of a strabismus man puffing on a corncob pipe. Rendered in graphite on paper, it’s tame compared to the bright paintings, with its precise hard lines and features, but is wildly drawn to give it virility and ferality. This picture is a break when trying to figure out exactly where Morgan was coming from. It is the perfect portrait of a normal man from the country enjoying a nice unhealthy smoke from a handmade pipe.

Viewers may wonder, however, if these works are too grotesque and belittling of America’s rural citizens. The imagery has the superficial appearance of objectifying and stereotyping country folk as brutish, over-sexualized, and drug-addled lunatics whose lives include a surplus of over indulgence. Nonetheless, most of her characters could easily be transferred to a stereotypical depiction of Brooklyn: beards, beer, anachronistic clothing, promiscuity, self-indulgence.

In the painting Plan B on Easter Sunday (2016), a woman with garish turquoise eye makeup, extends her tongue lasciviously, taking a birth control tablet on it in the manner of a sacrament. Elsewhere, in Creeper in the Grass (2016), a maniacal perverse man voyeuristically spies on a full-breasted blonde woman passed out in a field of daisies. Between the two of them, which join the narrative and portrait aspects of the show, and serve as bookends in its organization, Morgan provides a host of interesting characters for viewers to contend with. Her work is funny, exciting, crude, and skillfully made. Although it may make the viewer feel wrong, it is totally right — a guilty pleasure.