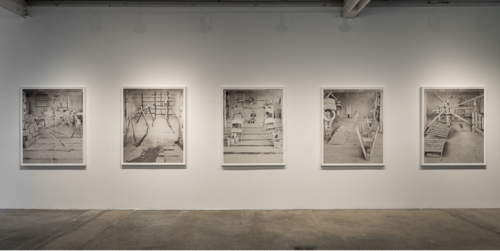 Thick, gray paint peels from the walls of the gallery, revealing shocks of white underneath. A large tower has crashed to the ground (when? it’s unclear), and barricades, painted ghostly white, hide fluorescent lights, throwing shadows across the cracking walls. In this evocative environment, altogether titled Tower, 2018, one doesn’t simply encounter Rodrigo Valenzuela’s work but rather becomes drawn into its political implications.

The artist’s large photographs scintillate. The seven works from his 2017 “Barricade” series present an achromatic playground of visual doubling and totemic sculptural assemblages, while the five works from the 2018 “Mask” series are somber portraits of men wearing ad hoc gas masks made of Coke cans and bleach bottles. This is an iconography of protest and authority under duress. We are ambiguously situated—is it before, or after, the Event? This ambiguity has formal implications as well, as the spaces shown in photographs such as Barricade No. 2, 2017, appear contiguous but are really scenes repeated in front of photographic backdrops of the same, just captured from different angles. The artist has titled his exhibition after Pablo Neruda’s sprawling Canto General, an epic poem from 1950 that tackles the longue durée of the Americas. Neruda is apropos in most contexts but especially here, where his words sometimes act like an ekphrasis delivered sixty-eight years too early: “I heard a voice rise up / from the mineshaft’s narrow bowels, / as from an infernal uterus, / and then a faceless creature / loomed forth, / a powdery mask / of sweat, blood and dust.”