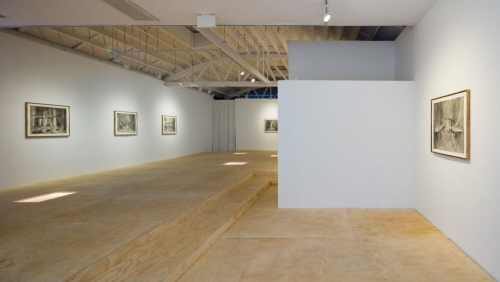 Rodrigo Valenzuela pursues a robust and multivalent practice that encompasses lavishly produced and materially rich photography, sculpture, installation and video. At the same time, these pursuits are equally centered on a semiotic, politically engaged post-capitalist critique of social constructs and civic institutions. All of these elements converge and converse in his recent exhibition, Journeyman, across a suite of photogravures, ceramic sculptures displayed in architectural interventions, and a pair of videos.

Valenzuela is received as a photographer, understandable because the final object, what makes it to exhibition, is mainly a photograph. However, those images are the results of an extended and labor-intensive sculptural process that happens inside the studio, wherein boxy prosceniums and the complex Moloch-like creature/machines that inhabit them are built, rebuilt and repeatedly photographed. This generates layers of real space with illusionistic qualities, and the questions the scenarios pose are only deepened in contemplating the sculptural figures.

Those figures are made by casting concrete and clay from discarded consumer packaging, and arranging components into micro-monuments, both abstract and totemic, biomorphic, architectural, and imbued with just enough personality to infer sentience and therefore a vague menace. Works like the arachnoidal boat-hull ribcage of “Stature No. 5” and the equine shadow puppet unicorn energy of “Stature No. 10” play with this anthropo-edificial figuration, while other works stay tethered to abstraction. By presenting these scenes as photographs, Valenzuela is able to play with the mechanics of perception, assumption, materiality, and curiosity. However, his sculptural impulse manifests through site-specific installations, such as in this case a false gallery floor into which are embedded clay objects made roughly the same way as those in the photographs. Evoking aerial views of city streets but also ancient alien technology, science-fiction weaponry, and sarcophaguses, they are lit like natural history museum vitrines and their dark surfaces give off a heaviness and again, a vague menace.

They offer an element of physicality that also expresses in the images, which are not photographs per se, but rather photogravures — weightier and more bespoke prints that hold their place among the sculptures, speak to their own process, and whose surfaces are mottled in a way that evokes the concrete itself, as surely as the false floor evokes a construction site. Journeymen are considered unskilled when in fact it’s the opposite, but they work piecemeal and face major obstacles to organizing. They are the subject of the video “Prole” which examines the internecine discourse on unionization. Valenzuela is sufficiently deliberate with the physicality of his materials to want them present in this conversation in their own right — especially a conversation that touches on both architectural expressions of institutional power and the work of those who construct them.