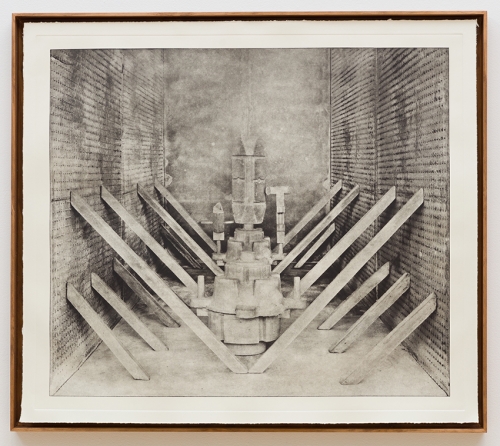 Rodrigo Valenzuela’s photographs not only look old but also were made using a pre-film process of photo-making called photogravure which lends rich grey-sepia tones to the prints, lending them an august air. His current exhibition at Klowden Mann, Journeyman, features eight of these prints from his Stature series (all works 2020), each capturing an assortment of abstract, concrete forms stacked on one another. The function of the photographed assemblages is unclear, though they resemble stark Soviet monuments or perhaps outdated industrial machinery. The press release likens these works to an exploration of “the discards and inversions of capitalist endeavor,” but our reading need not be so specific, as Valenzuela’s photographs, like the accompanying sculptures in the show, cause uncertainty on many levels.

Though it is impossible to detect this from the images, Valenzuela made his photographed ad-hoc sculptures by casting discarded packaging. Since he carefully balances each element before taking the photo, with nothing physically holding the pieces together, the stability of his subjects is also an illusion. Through the artifice of his trash-can minimalism, he upends both our assumptions about venerable stone monuments and the veracity of photography. In mimicking the language of documentary photography, Valenzuela exposes the medium’s artifice, while also producing images of seductive beauty. For instance, the concrete forms in Stature No. 8 (2020) together resemble a pre-Columbian carving resting on a modern pipe fitting, a marriage of industry and antiquity replicated in cheap styrofoam.

The photographs are accompanied by modestly-sized monochromatic ceramic sculptures that continue Valenzuela’s infatuation with ambiguity. Resembling architectural models, they are inset into a raised plywood floor built for the show, so that viewers must stoop to inspect them (each work is titled Airstrip). Some resemble engine parts, while others recall miniature freeways or stadiums. Valenzuela has previously discussed how his works reflect his experience growing up in Chile during Pinochet’s reign. With that in mind, these architectural forms take on a potentially sinister air as emblems of state repression, their black, unresolved geometries alluding perhaps to the failures of utopian modernism. They look almost familiar, projecting a kind of near-recognition that proves more unsettling than total abstraction.

Valenzuela’s autobiography (he worked in construction early on in his art career) informs his work’s exploration of identity, labor, class, and authority. Two films play in the back gallery, one of which, Prole (2015), depicts a group of Latino workers discussing union efforts. It’s verbal explication, however, pinpoints the context of the exhibition towards a specific labor issue, and lacks the intriguing nuance of the sculptures and photographs, which are so engaging because of their ambivalence.