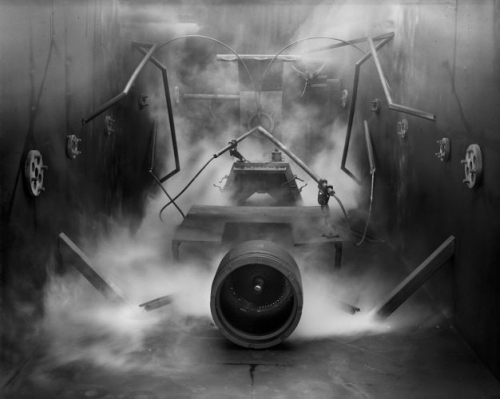 Galería Patricia Ready is proud to present “New works for a post-worker's world”, the first solo exhibition of the outstanding Chilean artist based in Los Angeles, California, Rodrigo Valenzuela, in the gallery's Main Room. The exhibition consists of the artist's most recent photographic series, Afterwork, made from 26 installations created in his studio that allude, like most of his work, to the working class.

The show, which was originally going to take place in early 2020, will finally take place from June 16, after a troubled year that has only made it more contingent. In it, the artist turns to science fiction as a last refuge to imagine counterproposals to an economic system that only produces consumers. Photography, a medium always linked to the register of reality, this time addresses the task of creating worlds, generating an imaginary that exploits the worst of capitalism to combat it with the power of imagination.

Valenzuela says: “I imagine that years pass after companies and factories do not need the present worker. With a bit of pessimism, I imagine situations where the fetishization of machines has left the worker as a ghost in the global economy.

The works are titled Afterwork, which makes reference to a simple question: What happens after work? What do we become? What is our role in society, where we fraternize with different people that we do not choose? How do we execute a social and work empathy if we are only producing money for home. After-work , after work, is when we were supposed to have fun, have a drink and make a friend and support against the oppression of the day. The works play with the idea of ​​the factory full of spirits suffering the best of times. "

Assistant Professor at UCLA School of Arts and Architecture. With a degree in history from the University of Chile in 2004, he moved to the United States in 2005. For approximately a decade, he worked in construction while working as an artist. In 2012 he returned to the academy and received an MFA from the University of Washington. Today, Valenzuela has multiple international awards and scholarships such as the Guggenheim Fellowhip, and his work is part of important collections in the United States, such as the Whitney Museum in New York; the Getty and the LACMA, in Los Angeles, or the one in Houston, among others.

“I construct narratives, scenes and stories that point to the tensions found between the individual and the communities. I use autobiographical threads to inform wider universal fields of experience. Gestures of alienation and displacement are the aesthetics and theme of much of my work. Often using landscapes and paintings with day laborers or myself, I explore the way an image is inhabited, and the way spaces, objects and people are translated into images. My work serves as an expressive and intimate point of contact between the broader realms of subjectivity and political contingency. Through my videos and photographs, I make images that seem familiar but distant to me. I involve the viewer in questions about the way in which the training and experience of each job is situated, how they exist in and out of place." RV

Read this article about the exhibition, written by Marilú Ortiz de Rozas in La Panera, here.