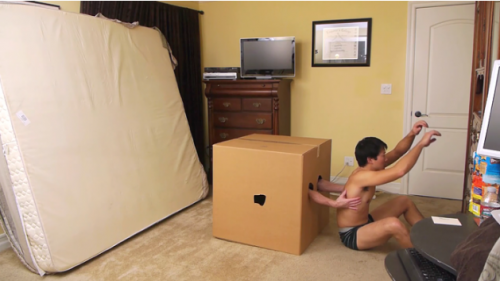 “Have you ever wanted to be an exhibitionist?” asks a man whose entire body is concealed inside a large cardboard box.

“Not in those exact words,” replies a man in a red flannel shirt. “Like, I never thought of it that way, [but] maybe that has something to do with being in front of a camera?”

The man in the red shirt is Kenneth Tam, a New York-based artist who stages "situations" that use the social space inhabited by male bodies to interrogate ideas of masculinity, vulnerability, and intimacy. The man in the box is a stranger he met through a call he put out on Craigslist.

“The box was my idea,” Tam tells me. “It was a mechanism that allowed for the meeting to take place. The box functioned as a symbolic container for his desires for me, and became a semi-porous membrane through which we would conduct our interactions. It gave me a modicum of control over the situation, albeit one that was nearly paper-thin.”

The video The Compression Is Not Subservient to the Explosion; It Gives It Increased Force is a voyeuristic document of this “meeting.” Throughout its 11 minutes and 26 seconds, we watch the stranger coax Tam to take off his clothes and allow him to touch various parts of the artist’s body through holes he has cut in the box. His goal is to get Tam to feel relaxed, but he also just wants to touch him. The stranger succeeds at the latter, if not the former. We never see his face.

This piece, along with videos by Shana Hoehn and Zachary Fabri, is currently installed at Seattle University’s Vachon Gallery as part of Closed Quarters, curated by Rodrigo Valenzuela. A graduate of the University of Washington’s MFA program and recipient of the 2013 Stranger Genius Award for visual art, Valenzuela has recently relocated to Los Angeles, where he is now an assistant professor in the Department of Art at UCLA.

For Valenzuela, curating is a way to introduce new artists to places where they might not otherwise get shown. “At a certain point, I realized that if I wanted to see this kind of video art in Seattle, I was going to have to bring it here,” he told me at the opening.

Closed Quarters features three video works connected by themes like the transactional nature of contemporary relationships, domestic environments, and the role that mundane objects play in mediating these relationships.

In Home Curtains, artist Zachary Fabri stands in a window with a sheer curtain covering his nude body like a delicate veil, and then slowly walks backward, emerging from the curtain. He repeats this maneuver in a variety of domestic spaces, each alike but distinct. At one point, he crouches on top of a chair to perform a variation on the move and loses his balance, proclaiming “Oh, shit!” as he tumbles onto the floor, pulling the curtain down with him.

Fabri’s work deals with the constant negotiations inherent in the performance of Black masculinity, often placing himself in locations where larger systems of structural oppression can reveal themselves. By enacting these movements in domestic spaces, Home Curtains reveals how precariousness can manifest in even the most intimate of environments.

Shana Hoehn’s shudder blade teeter topple concerns the interactions of two characters seated on green yoga mats side by side on a checkerboard-tiled floor. Much of the video is shot from the point of view of a slowly rotating ceiling fan, creating a dizzying sense of vertigo. As the room turns, a glass falls from a tabletop onto the floor.

The resulting crash echoes the sound of an automobile accident occurring offscreen, heard and not seen. Through a series of similar correspondences—for instance, pairing the wing of an airplane flying overhead with the blade of a ceiling fan—Hoehn nests the activity in this room within larger systems that inscribe interpersonal interactions.

Like the figures in Tam’s video, Hoehn’s characters touch, but it’s unclear whether they are ever truly comfortable together.

Image: Kenneth Tam, still from The Compression Is Not Subservient to the Explosion; It Gives It Increased Force