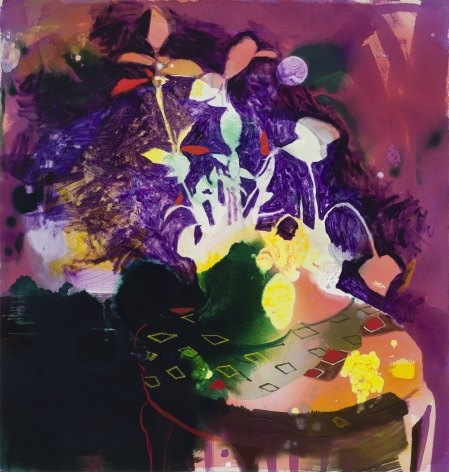 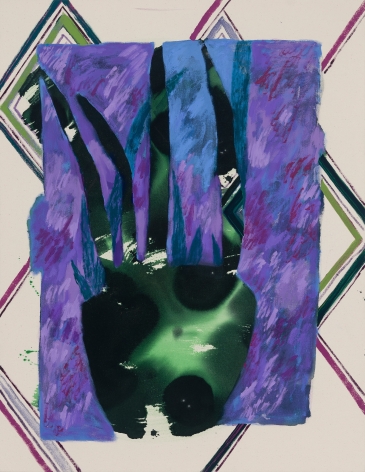 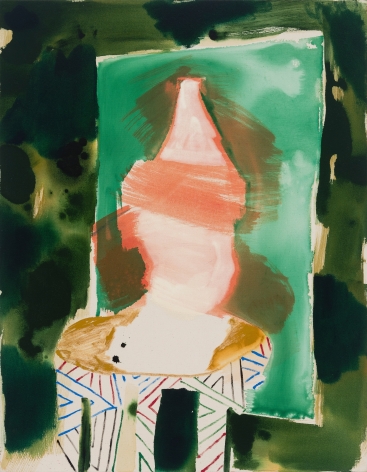 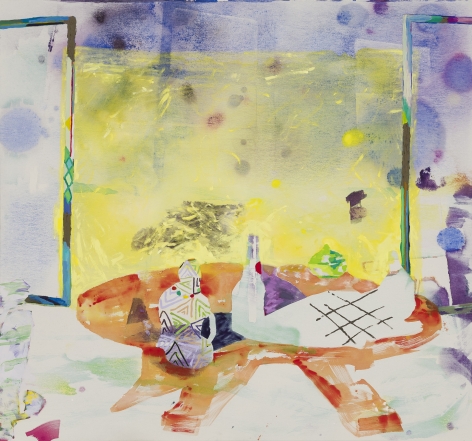 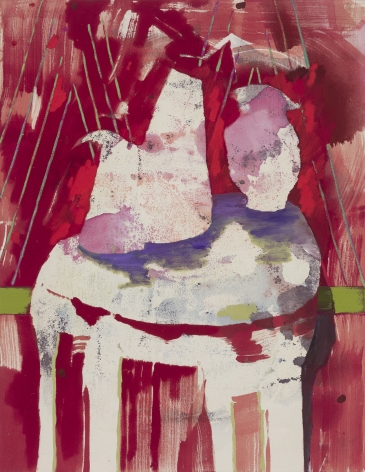 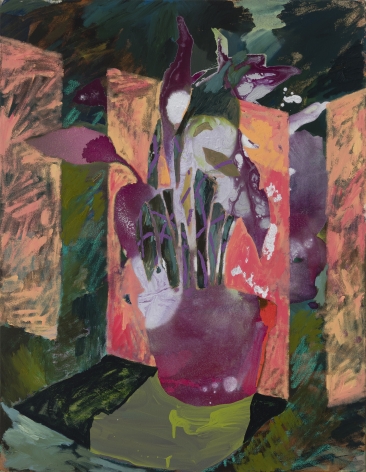 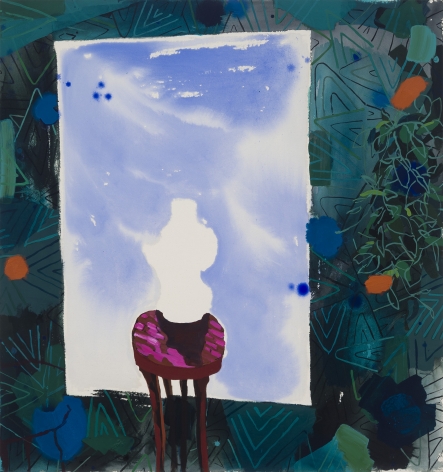 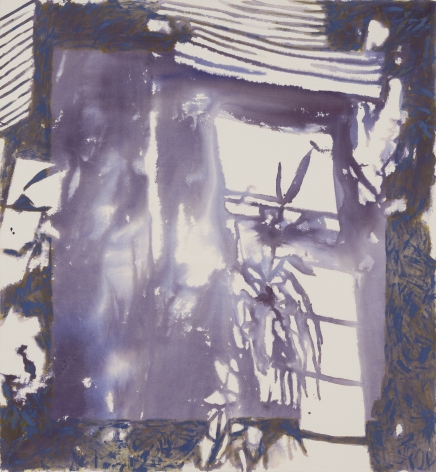 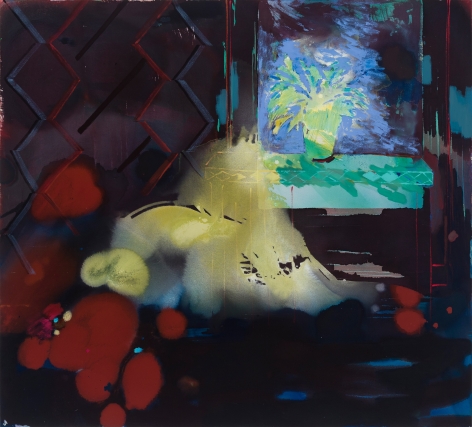 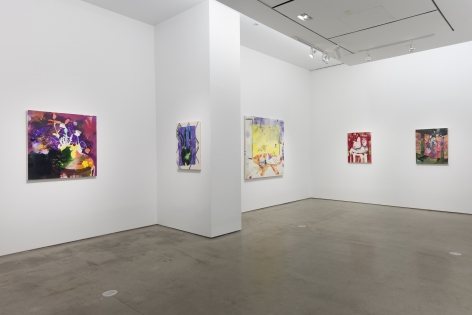 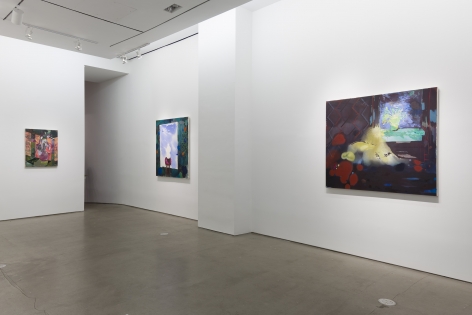 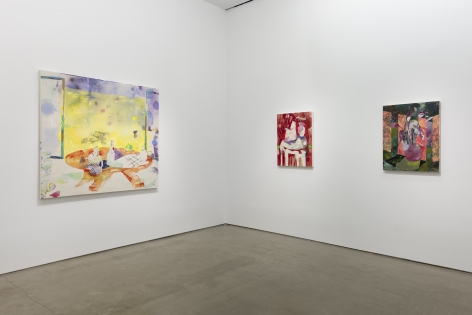 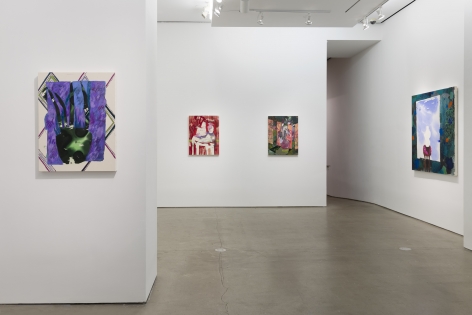 Asya Geisberg Gallery is proud to present “Held in Place, Light in Hand”, an exhibition of paintings by Angelina Gualdoni. This will be the artist’s second solo exhibition with the gallery. Gualdoni’s captivating new series departs from the purer abstract spaces in her previous exhibition, and returns to modes of representation that both emerge from and recede into her signature pours. Based on suggestions of interiors and still life, each painting distinctively uses geometric patterns, often fragmented, that weave through the picture plane and juxtapose the ethereal washes of color. Often using collage and digitally manipulated photos taken by the artist as her starting point, Gualdoni continues her interest in the deconstruction of space alongside familiar concerns such as the existence of shape as a void in shadow, the tension of positive and negative, and absence and presence of quasi-identifiable objects. Plant leaves echo triangular shapes elsewhere, film noir-striped shadows glow from an unseen venetian blind, and always a limpid pool of glorious color overwhelms any clear sense of “here” or “there.”

Gualdoni’s gamesmanship never allows the depicted object or space to be the protagonist of the story. Instead, the subject becomes the complicated play between background and foreground, as stains overtake form, and borders are transgressed by inchoate areas. The middle ground functions as a mask, window, or portal through which the viewer attempts to see. The pour courses through, uncontrollable, while the frames and patterns attempt to contain and detain the flow. While clearly honoring Matisse, Sonia Delaunay, and Braque among others, she continues to elide the tropes of the still life tradition. Instead of pointing to symbolic or personal meaning, Gualdoni’s riffs on Post-Impressionism and Cubism argue for a constant flux of time and space.

The porous spaces in Gualdoni’s paintings point to the fluidity of roles within the domestic sphere and of time itself, implied by the slow seepage of paint or quick stroke of the paintbrush. Her works show the contemporary position of painting at its best- unflinchingly referential, boldly mixing traditions and personal stylistic rituals, and emphatically necessary to our current condition. 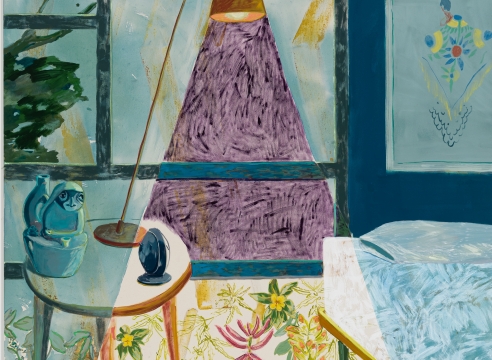 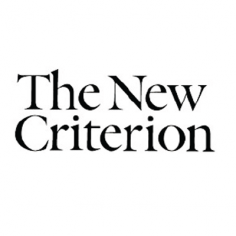 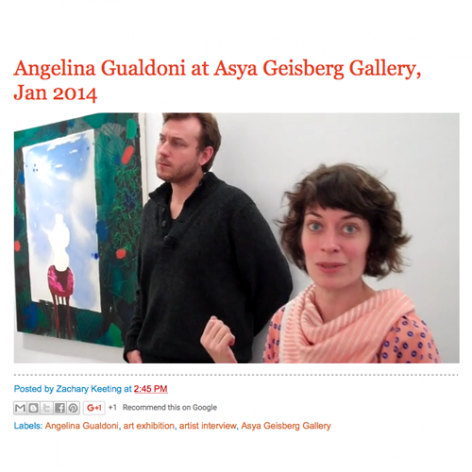 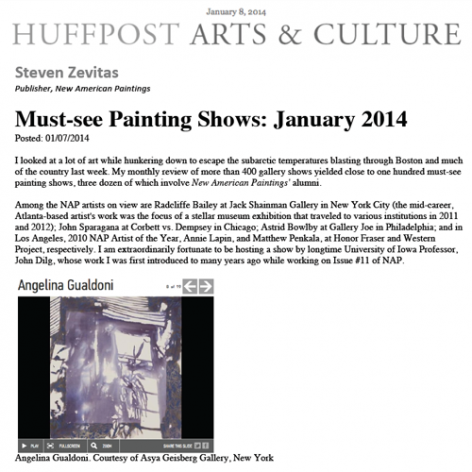