Acrylic and gouache on illustration board

Procession of Dust (Entropy, Ontology, and the Hubris of Mankind) Study 01, 2014

Plaster and metal grommets on fabric with steel fixture

Inspired by the dystopian prognostication and dark metaphors in John D'Agata's book About a Mountain, this exhibition digressively explores metaphysical tropes of human existence, disaster, time, and our ongoing existential crisis. Ninety miles north of Las Vegas lies Yucca Mountain, a proposed storage site for 77,000 tons of nuclear waste. Stymied by Kafkaesque debacles, the project ultimately obsolesced. D'Agata presents a bleak and disambiguate survey of our relationship to mortality through cultural desensitization, and the orthodoxy of irrationality as the panacea for our scientific and corporate ills. As in the crux of D'Agata's book, the works in this exhibition utilize utopian, cultural and historical reference points, with each piece weaving a complex narrative whilst simultaneously acting as nodes to a larger discourse.

As nuclear waste is safe only after 10,000 years, the Department of Energy's effort to generate a sign for Yucca proved to be futile, exposing the paradox of our incomprehension of time, despite our efforts to define our chronology. Vernacular transmutation would reduce a coherent text to an archaic cipher ten millennia from now; therefore, the proposed solution was to utilize an iconic image synonymous to that of human despair, an almost Jungian archetype within the quotidian psyche: Edvard Munch's The Scream. Today, Munch's masterpiece faces its own mutated renaissance, embodying Theodor Adorno and Max Horkheimer's prediction that "the whole world must pass through the filter of the culture industry."

For this exhibition, Anonymous reproduces the 20th-century masterpiece at the request of the curator, through a mass market Chinese reproduction website. In what is more a comedic facsimile than a sensitive homage, Munch's sombre palette is replaced with lurid pigments, applied semi-dryly with cumbersome fervency. The painting, now a mere echo of its darker predecessor, is the epitome of disconnected appropriation. If D'Agata's metaphor for doom is suicide, then here it is popular culture. The Scream becomes a farcical example of our willingness to satirize and distance ourselves from our own mortality. Culture is the colosseum where we sully ourselves and our history, transforming it into a palpable and benign commodity, repackaged, palatable and formulaic, in order to feed our appetite for distraction. The Scream's post-modern rebirth placates our despair, dismissing human horror as a distant concern, and transforming the primal scream into an inane symbol of our collective Sartrean anguish.

Throughout the book, we ricochet between the rational and chaotic, and in Gerhard Frommel's Untitled, we continue on this trajectory. Analogous to the birth of our universe, Frommel's paintings grapple with the materialization of form within the void. Undulating primordial spaces which coalesce and collapse, are in tense juxtaposition with graphic representations of the rational. Gonzo gestures threaten to envelop geometric forms, which refuse to be drawn back into primordial chaos. Frommel's interior spaces exhibit a heterogeneous geography, where tautological juxtapositions force a swift recourse into Dionysian versus Apollonian allegory.

In Shroud (Meriem's Crust Cloak), Rachel Niffenegger delivers a soupçon of the anatomical yet articulates a cogent bodily apocalypse. The minimal manipulation and juxtaposition of materiality alludes to decay, dysmorphia and the collapse of the organic under the reign of the artificial. Delicate material hangs lifelessly from a bone-like attenuated steel rod, echoing a fragmented crucifixion, remnants from a hedonistic sacrificial ceremony, or the rejection of flesh in favor of the machine. The anthropomorphic fabric is coated with flaking paint akin to skin in the process of decomposition. The peeling back of this pigment reveals a stained, ephemeral fabric. Niffenegger's renunciation of a perceivable body is conjured through a sculpture/painting crossbreed that vibrates between the walls and floor, yet declines interaction with either.

In Sticks and Stones No. 4, Alejandro Almanza Pereda magnifies physical and semiotic connections of found and fabricated objects to pointedly emphasize the tightrope we tread between disaster and calm, creating a tense harmony through counterbalance and abstract equilibriums. The artist's jaunty, bricolaged scaffolds present a pertinent contradiction, employing a balance of chance and trust to explore notions of safety. The noxious and the domestic coerce and stabilize with contrasting weight and fragility. Pereda challenges ideas of infrastructure and the framework of society held together by mere threads, positing that society's most potent structures subsist on a bedrock of fragile foundations. Pereda's gamut of tranklements reference historic and cultural connections both local and global. Sticks and Stones No. 4's cynosure is the void between the objects, where Pereda presents tension as a tangible physical entity in and of itself. Pereda captures the physicality of potential disaster, usually a negated concept in our society, and presents it to the viewer for consumption and contemplation.

Vincent Como's Procession of Dust (Entropy, Ontology, and the Hubris of Mankind) deliberates our cosmological indifference. Here, the complexity of the macrocosmic is quantified within a collection of dust, a representation of bodily cremation or that of our terra firma. Referencing Anglican funeral rhetoric "ashes to ashes, dust to dust..." Como urges us to consider the forgotten relationship between the very particles of our being to calamitous phenomena occurring in distant galaxies. Within the frame, tension is created between the dust and an uncontaminated adherent plane, as subtle movements affect permanent and irreversible changes, creating a metaphor for repercussions that not only spill into our lifetime but throughout the universe itself. Como's "Dust...." elicits existentialist discourse and contemplation of the ambiguity of our cosmological knowledge.

Elisa Lendvay's Dream Chip (Segue) actively distorts ideas of our future, our past and our present. Emerging from a dreamscape, Dream Chip alludes to function, technology, psychology and artifact. Recalling an elongated lemniscate, its form converges and bifurcates back and forth. Its matte exterior exhibits an ersatz senescence, while its centrally dissecting plane could be decorative embellishment from a quondam civilization. Lendvay's hand melds into her creations, blurring the line between the synthetic and the pre-existing, fabricating objects that tread the boundary between our memory and hers. The artist's psychological excavation and manipulation of the phantasmagoric creates a skewed archeological repository that forges a nexus between history, memory, and matter, projecting a latent spectacle of our collective unconscious and distorted archetypes. Dream Chip provides a tangible familiarity akin to déjà vu or a feigned recollection, and through Lendvay's restraint, lucidity slips continually in and out of comprehension. The artist's personal iconography refuses decipherment, creating a futurist-historical paradox that Lendvay constructs through restrained manipulation.

Gerhard Frommel was born in Austria and lives and works in New York. He received an MFA from the University of Applied Arts, Vienna, and an MA in Philosophy, Pedagogy, and Psychology from the University of Vienna. Frommel completed the Whitney Independent Study Program under Benjamin Buchloh. His work has been exhibited by Mass MoCa, North Adams, MA, the Clocktower, Bronx, NY, Haven Arts Gallery, Bronx, NY, and Espace Jacques Donguy, Paris, among others. In 1993 Frommel co-founded the Institute of the History of the Avant-garde, a platform for avant-garde theory and activist praxis.

Rachel Niffenegger lives and works in Chicago, IL. She received her BFA from The School of the Art Institute of Chicago and her MFA from Northwestern University. Solo and two person exhibitions include Western Exhibitions, Chicago, IL; Club Midnight, Berlin; and The Post Family, Chicago, IL. Group exhibitions include Museum voor Moderne Kunst, Arnhem, NL; Tracy Williams, LTD, NYC; NADA New York, with Western Exhibitions; and Museum of Contemporary Art, Chicago, IL. She is the recipient of the Cary Lane Graduate Stipend, the Art Theory and Practice Graduate Fellowship, and the Ox-Bow School of Art and Artists Residency Fellowship.

Don Dixon lives and works in Long Beach, California. He began his career in the 1970's, and has exhibited his work in Oslo, Berlin, and Washington DC. He is a founding member of the International Association of Astronomical Artists (IAAA) and has served as the Art Director for Griffith Observatory since 1991. Dixon has received honors from NASA and The New York Society of Illustrators, and his artwork has been featured on the covers of Scientific American, Astronomy, Sky and Telescope, Bild der Wissenschaft, and dozens of books, ranging from physics compendiums to science fiction novels.

Europic Art & Craft Co. (Anonymous) is a fast growing company in China, focusing on oil painting reproductions, located in Xiamen, the premier oil painting reproducing center in China. All artworks are genuine hand-painted oil paintings on canvas. No machine printing or computer spraying is used. Our artists are talented graduates of the art schools for professionals, thus, museum quality is guaranteed. 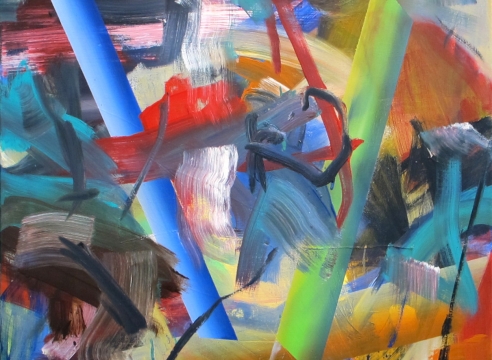