Asya Geisberg Gallery is pleased to present “Embodied Energies”, the third solo exhibition of installation artist Julie Schenkelberg. Expanding on her language of architectural decay, historical detritus, and domestic destruction, Schenkelberg has created a site-specific installation “Swan Song” that traverses the polygon of the gallery walls, creating a variety of experiences for the viewer - encountering the expansive Rabelaisian work from the street, exploring intimate nooks created by claustrophobic canopies, and stumbling on piles of rubble. In a process that began five years ago with the gathering of material from salvage yards, thrift stores, and scouring for family heirlooms, the artist spent ten weeks working in a disused church basement in the Midwest, before transferring “Swan Song” to the gallery, and completing it on site. The winner of the ArtPrize Installation Juried award for her massive installation “Symptomatic Constant: Shipwreck in the Midwest”, Schenkelberg is well known for her site-specific works that disrupt and emerge from each location.

Schenkelberg’s ambitious oeuvre has strong antecedents in ‘70s artists such as Louise Nevelson, Gordon Matta Clark, and Louise Bourgeois. Her work seamlessly intersects the poignant interaction of material of contemporary artists like Jessica Jackson Hutchins with artists such as David Altmejd and Jason Rhoades who invent their own worlds, identifiable across media. Schenkelberg’s unique point of view emanates from her immersion in Rust Belt decay, via material sourced from sidewalks and scrap heaps created by industrial demise. Construction and domestic materials such as wooden furniture, marble, silk, and dishware suggest the decaying glamour of a gloried era. Plaster, cement, and resin encases or spills out through slats, and sawed cuts and drilled holes overtake and defy solidity. While wistful in its references of discarded and abandoned wreckage, “Swan Song”, with its minutely crafted details and epic scope, nonetheless gives hope of rebirth for cities such as Detroit, Pittsburgh, and her native Cleveland. The cinders and ashes of broken homes and upturned lives become not just an epitaph for economic downturn but a deeply aesthetic excavation and reinvention. 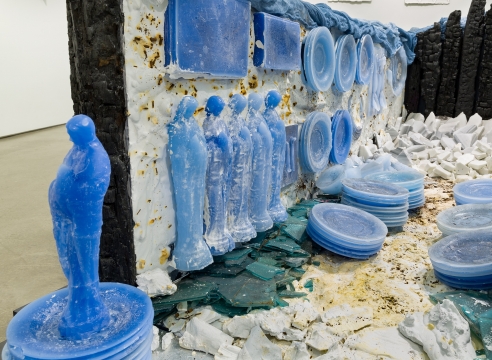 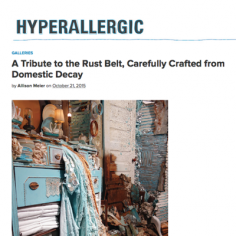 Hyperallergic "A Tribute to the Rust Belt"October 21, 2015
Download PDF 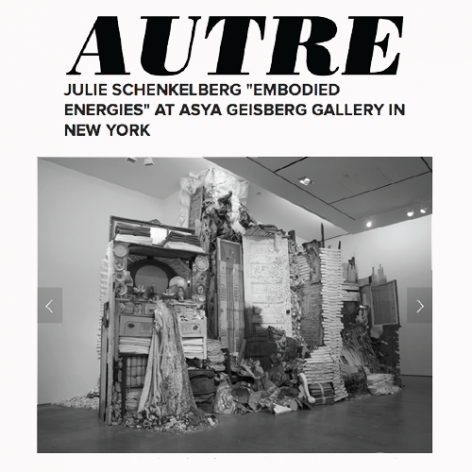 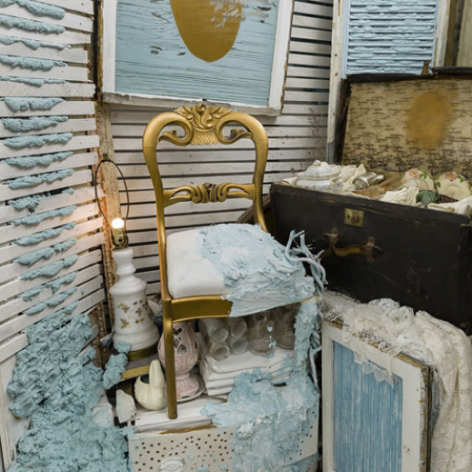